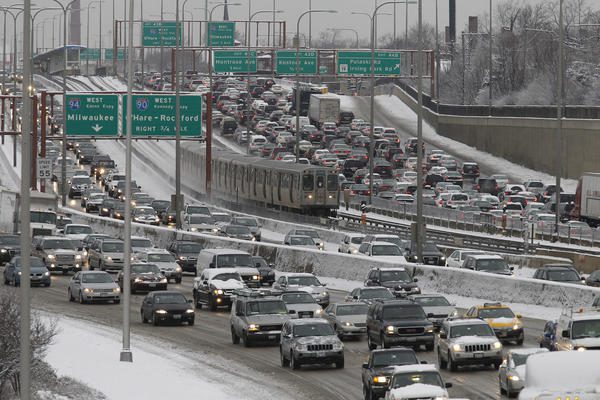 A study from researchers at Texas A&M University's Transportation Institute assessed traffic congestion in urban areas across the U.S. and has concluded that the Chicago metropolitan area ranks seventh among other large urban areas in terms of the worst traffic. The study, known as the Urban Mobility Report used 2011 numbers, which are the most recently available data, and further found that commuting in the Chicago area can be highly unpredictable as well.

Here are some details and statistics about what it means for individuals traveling through the Windy City and the surrounding area:

* The average commuter traveling in a private vehicle in the Chicagoland area spent 51 extra hours sitting in traffic in 2011. This ranks Chicago in seventh place for worst congestion among large urban areas while the Washington area ranks first with 67 hours spent in traffic per commuter.

* When compared to the 498 urban areas in the study, Chicago ranks 13th.

* Additionally, sitting in traffic caused the average commuter to use an extra 24 gallons of fuel and the congestion cost per commuter, which includes the cost of gasoline and the cost of time, was $1,153.

* Cumulatively, commuters in Chicago spent an extra 271,718 hours in traffic and consumed 127,016 additional gallons of gasoline, both of which contributed to a total congestion cost of $6.214 million dollars.

* Travel in the Chicago area is also highly unreliable and suggests that commuters plan accordingly.

* Congestion in Chicago relative to free-flow traffic periods stayed constant between 2010 and 2011, but increased between 1982 and 2011.

* Researchers also looked at the carbon emissions that result from traffic congestion and found during congested times, the Chicago area produced 2.32 million pounds of carbon emissions, which equates to 434 pounds per commuter.

* The travel time during a peak period of congestion on a typical weekday was 44 minutes.

* On a positive note, the Chicagoland ranked second in terms of public transportation savings. With commuters utilizing this method of transportation, it saved $1.542 million in fuel and time costs, as well as 67,432 hours in delays.

* The Chicagoland is experiencing an urban area demand and roadway growth trend that is more than 30 percent faster than the national average.